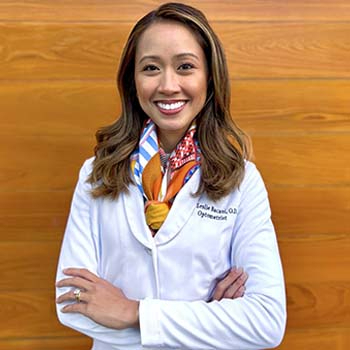 Dr. Leslie Bacani works at the Cerritos and Newport offices.

Dr. Leslie A. Bacani grew up in the Central Valley, where she received her undergraduate degree in Biology from California State University, Fresno. She received her Doctorate in Optometry at Southern California College of Optometry (fun fact: Dr. Bacani graduated in the same class with Dr. Bonnie Samuelson!). Dr. Bacani was extensively involved during her optometric training, serving as Class President for 3 years and Student Association President of her University for 1 year. She received multiple leadership awards, traveled to many optometric conventions in Denver, St. Louis, Las Vegas, and San Francisco, and advocated for the optometric profession in Washington, D.C.

Dr. Bacani enjoys the beauty of the Southwest, and completed her 4th-year externships at VA Tucson, VA Salt Lake City, and served the Navajo people at an Indian Health Service hospital in Crownpoint, New Mexico. During these externships, Dr. Bacani managed many ocular diseases including glaucoma, diabetic retinopathy, cataracts, and macular degeneration.

After completing her optometric training, Dr. Bacani practiced Primary Care at her hometown in Fresno, CA. Shortly after, she moved to Orange County to join her husband, Ryan–an OC native who works in Commercial Real Estate. They recently wedded in 2021 in the vast and peaceful canyons of Utah. During her time off, Dr. Bacani values spending time with her husband. You can find them enjoying lunch at Javier’s, or grabbing coffee with their lovable shih tzu puppy, Pooka!